The performance of large optical telescopes is strongly affected by atmospheric turbulence that distorts the wavefront from stars and galaxies, blurring the astronomical images and limiting the resolution that the optical system can achieve.

In order to compensate the aberration introduced by the atmosphere, modern telescopes implement adaptive optics (AO) systems.  This technique is based on a deformable mirror that continuously compensates the wavefront fluctuations of the astronomical object, by using a bright star as a guide reference for atmospheric turbulence. This results in a dramatic improvement of resolution and information on the output image, as seen in Fig. 1.  Since the availability of bright natural stars within a small field of view is very limited, artificial stars are used as a reference. These stars are created by a laser launched from the telescope, whose wavelength (589 nm) is resonant with the sodium atoms in the mesosphere (~90 km altitude). The backscattered emission from the excited atoms is seen from the telescope as a guide star for AO correction 1. Hence the name of Laser Guide Star (LGS). 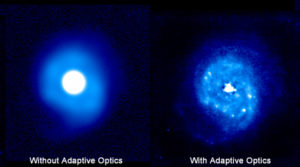 The interaction of the laser light and sodium atoms has been exhaustively studied and modeled by using Bloch equations 2. This method considers spontaneous and stimulated emission in any alkali atom (e.g. sodium), Larmor precession due to geomagnetic field, laser polarization, recoil, coupled velocity groups, finite atomic dwell time, laser bandwidth, and repumping. The Bloch equation method has been used to simulate the LGS in the mesosphere and to optimize the LGS efficiency, which is of importance for optimal AO correction 3.

In collaboration with the European Southern Observatory (ESO), we continue the studies of Laser Guide Stars with the experimental validation of the already developed laser-sodium interaction model. In this experiment, we will simulate the conditions of the mesospheric sodium atoms in a laboratory environment, and will conduct measurements of the photon flux from a sodium cell excited with the Raman-Fiber amplified laser source developed at ESO 4. This project will allow us to optimize the laser parameters to improve the efficiency of LGS being used for the largest telescopes in the world. 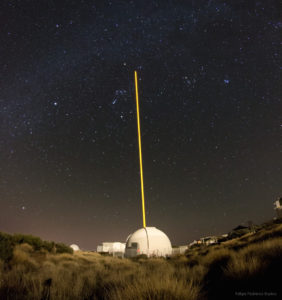 Another potential application of a LGS is remote magnetometry based on spin precession of sodium atoms. The Fig. 3 illustrates the proposed experiment for mesospheric magnetometry 5. A modulated version of the LGS beam is used to spin-polarize the sodium atoms at an angle to the geomagnetic field in the mesosphere, allowing them to precess at the Larmor frequency. When the frequency of the modulation of the laser and the Larmor frequency match, a resonance is observed and an accurate measure of the geomagnetic field can be obtained as shown in Fig 4. 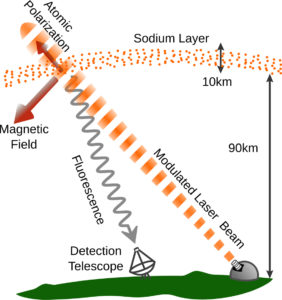 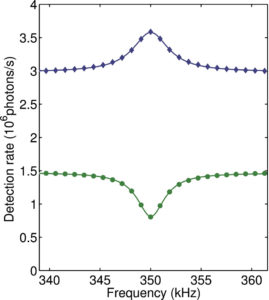 Figure 4: Mesospheric magnetometry resonance for D1 and D2 transitions of Sodium for a magnetic field of 0.5 G.